Table of contents:
I. What is ayahuasca?
II. Ayahuasca in new contexts
III. An ancestral medicine under modern eyes
IV. What is the legal status of ayahuasca?
V. And what are its effects?
VI. Ayahuasca interaction with cannabis
VII. Other suggestions

In our second post in the series, we will present the physical and mystical powers of ayahuasca, derived from ancient knowledge and full of magic. What is it, how does it work and what are the main rituals connected to it?

Ayahuasca: the “vine of the spirit”, named by the Quechuas, is a drink full of mysticism. It is also known by many different nicknames, such as Daime, Yagé, Caapi, Pildé, Dapa, or Kamaranpi. Although people know what it is made of and what its active principle is, little is known about its creation – which has generated a tradition that, according to historians, is already millennial.

We Brazilians are lucky enough to live in one of the cradles of ayahuasca, where the tea is already part of several religions, and has effects researched by science. Although much has been discovered, there is still a whole world of possibilities that are being explored in this regard. But how far is it possible to go without disrespecting this sacred element?

In the second pots of the series “cannabis and other drugs”, we do not only want to introduce ayahuasca to you, but also bring important reflections, thinking about the history of so many ancestral cultures responsible for creating and improving this substance that, even today, is a medicine for beyond our physical body.

Close your eyes, take a deep breath and immerse yourself in this fascinating culture with us! 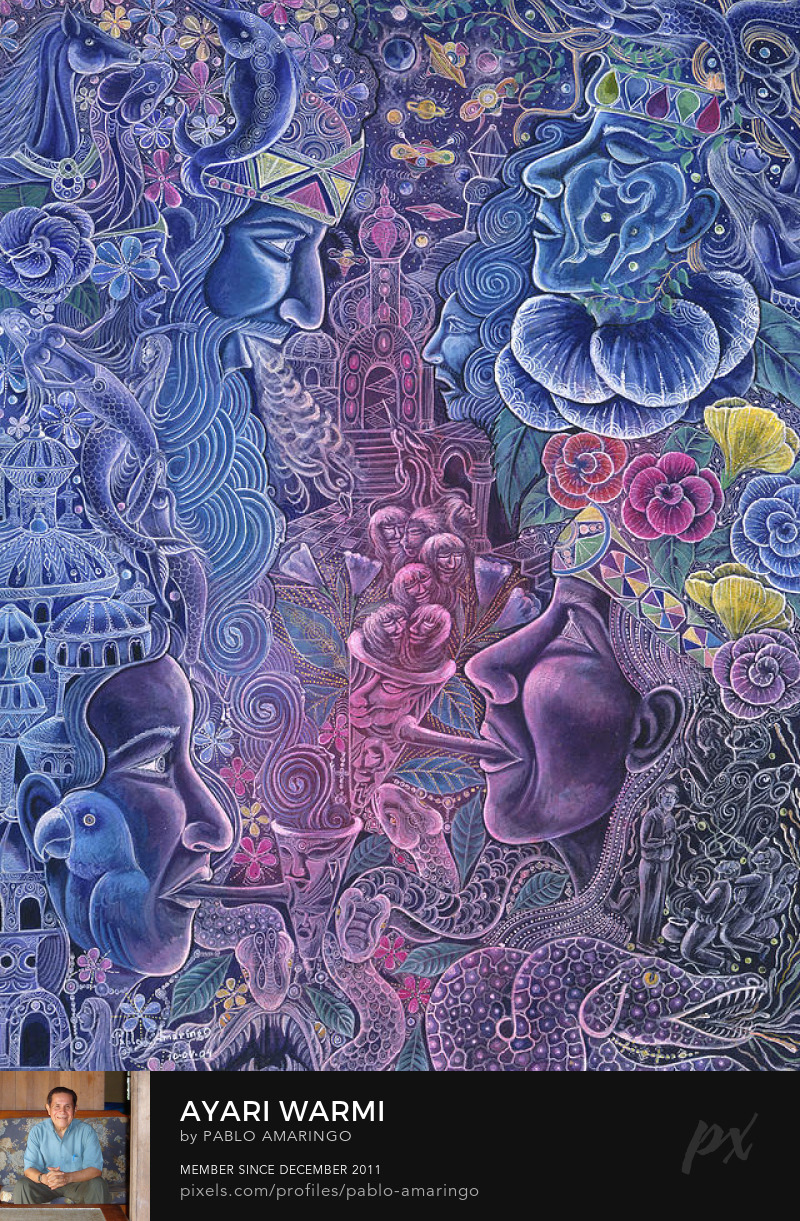 Basically, ayahuasca is made up of two main elements: pieces of the jagube vine (or mariri) and leaves of a shrub called chacrona. The shrub contains the active ingredient of the mixture, DMT (n, n-dimethyltryptamine), while the vine has monoamine oxidase inhibitors, which allows the DMT to pass through the digestive system without being destroyed. It is teamwork that makes this plant synergy so powerful. There are also other herbs that can be part of the decoction, and the mix chosen depends on the tribe or religion that will use it.

But who discovered this magic where uniting two plants, a tea was created to get in contact with Gods? No one knows exactly where it started, but there are records of several South American cultures that have used this mixture for centuries as a form of sacred medicine. In mummies found in Chile, between 1,000 and 1,500 years old, traces of harmalina, one of the substances contained in ayahuasca, were discovered. On an expedition in southwest Bolivia, a leather bag of around 900 to 1170 years was also discovered, containing ritual objects and remnants of the plants used to make tea.

English botanist Richard Spruce was the first white man to scientifically classify the vine used to prepare ayahuasca. He spent 15 years in the Amazon, from 1849 to 1864, in order to collect and study new plant species. During the period, he witnessed the rituals still unknown to Europeans, where the indigenous people used a consciousness-altering drink. 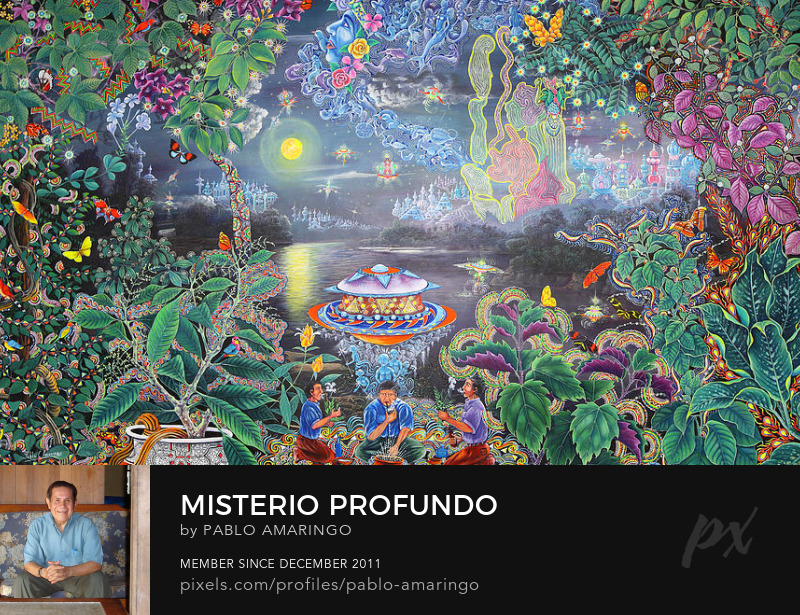 And these practices, like that of the indigenous people, are part of shamanism – a term created by anthropologists to account for all ancestral practices that maintain a relationship with the Sacred, deities, spirits and altered states of consciousness. Studies show that shamanism has survived since the Palaeolithic era, but there is nothing to stop thinking that traditions may be even older. Its remnants can be found all around the world.

Shamanic rituals with ayahuasca are celebrated by different ethnic groups in South America, such as the peoples:

In addition to 70 other ethnic groups in the Amazon region.

But how did their ancestral wisdom become so popular?

At the beginning of the 20th century, the rubber tapper Raimundo Irineu Serra got to know ayahuasca in his interactions with indigenous groups. It is believed that Mestre Irineu, as he became known, drank the tea for the first time in Peru. When looking at the moon, he saw a woman of enormous beauty – whom she called the Goddess of the Forest. After testing him, she granted him a desire: to become a great healer, to help more and more people. 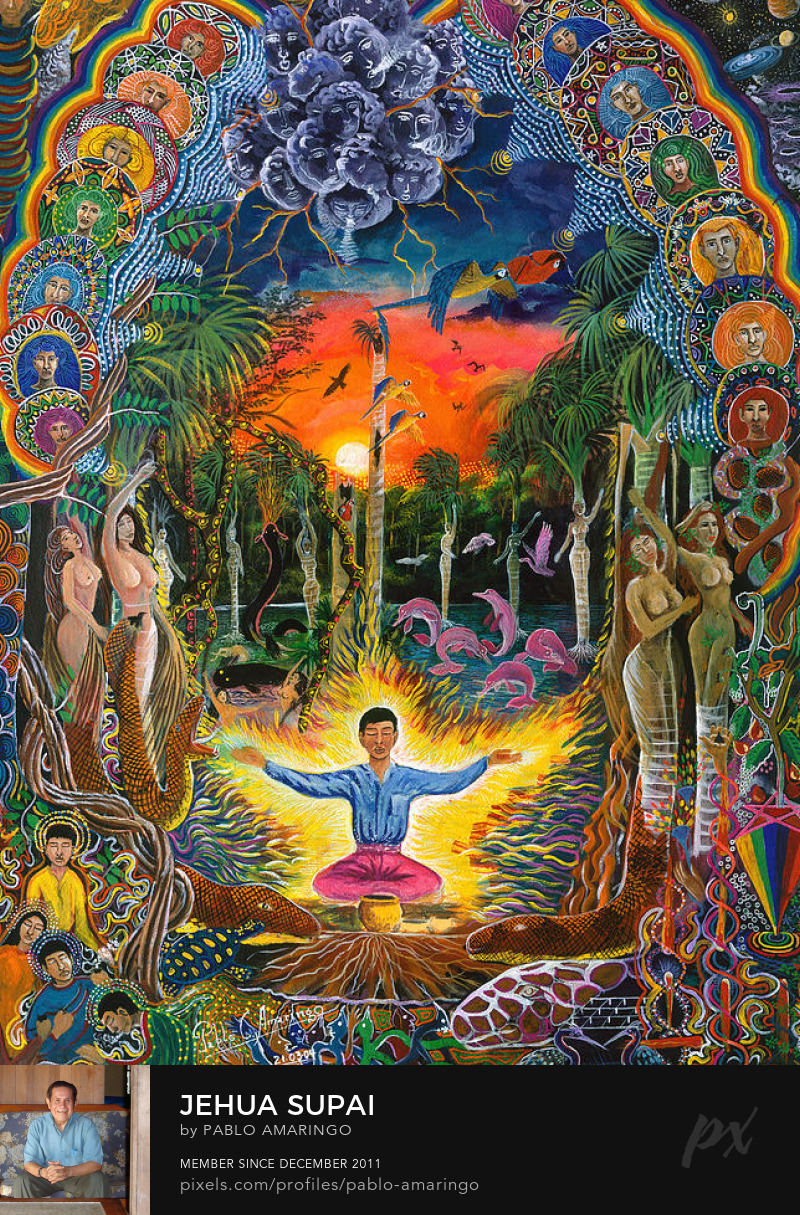 After what he experienced, in the 1930s he created the Santo Daime doctrine – which mixes Catholic references with indigenous knowledge.

According to practitioners of the religion, Daime comes from the humility of standing in front of the gods and spirits to ask “give me strength, give me love”. He was one of the main responsible for the popularization of the practice, later also adopted by other religious associations – such as Barquinha, União do Vegetal and approximately 30 others. Today, there are several syncretic movements that bring together shamanic, Catholic, African-based knowledge and other elements in the organization of healing rites, whether physical or spiritual.

In addition to the Santo Daime and related religions, there is a rescue movement called by researchers as neo-shamanic – the creator of new models of spirituality, therapy, consumption and sociability, where tradition is a symbolic resource.

There is a pattern in these practices: according to studies, in the urban ayahuasca circuit, “a ritual model has become common in which medicines from the forest (like ayahuasca and rapé) are consumed, chants of indigenous inspiration are sung from the complex Nova Era, or even Santo Daime hymns, organic instruments are played, such as drums and maracas, synthetic songs and mantras are heard, usually with the group around a fire, each sitting or lying on his mat. The cultural influences on the organization and execution of these rituals are diverse, but the emphasis is usually on the symbolic arsenal of indigenous origin”.

An ancestral medicine under modern eyes

When looking at this sacred element in an anthropological way, we ask ourselves: what is the danger of removing ayahuasca from its original environment?

The PhD in anthropology Bia Labate has extensive studies on the subject, and proposes reflections on the challenges that the globalization of ayahuasca presents. For her, there are several key issues, such as: 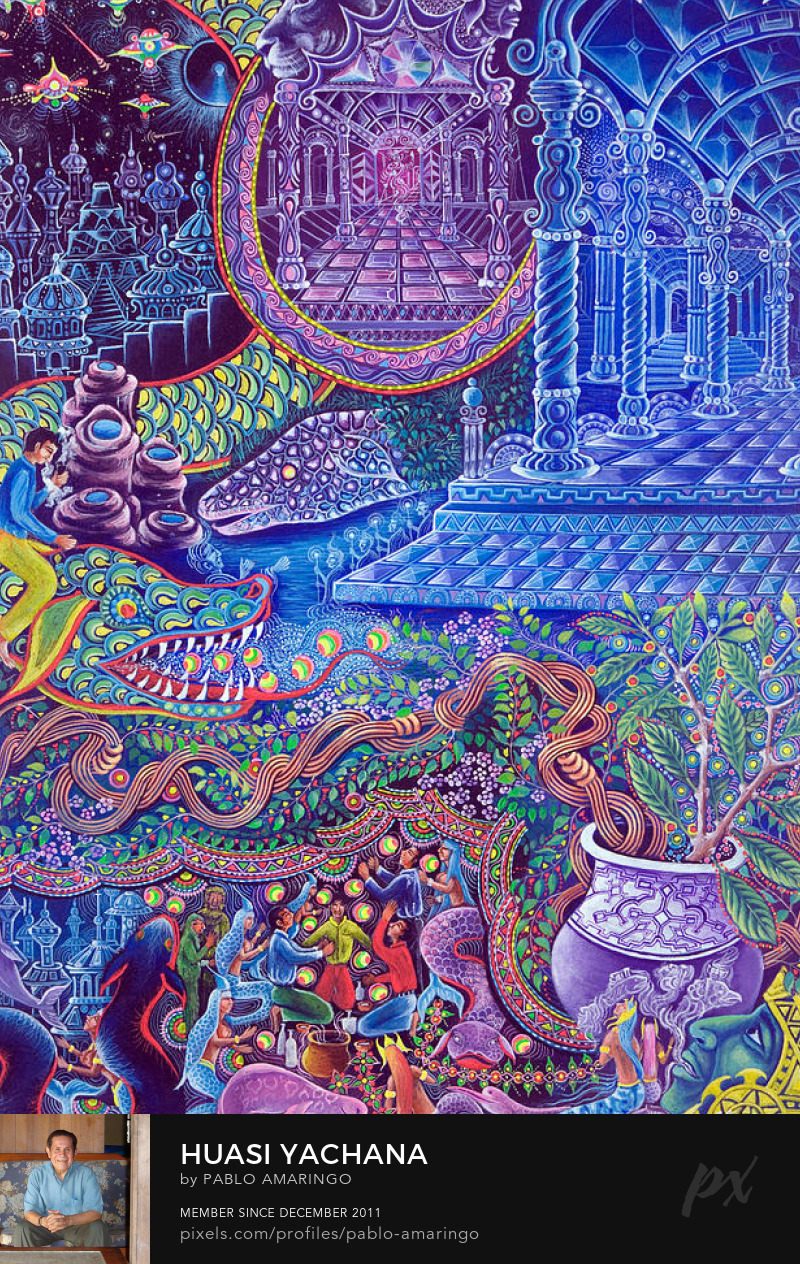 According to Labate, the development of neo-shamanism and the use of ayahuasca is not an escape from “tradition”, but a continuation of its historical process of formation and original synthesis between different indigenous ethnic traditions and Christian elements. We would then no longer have the means to consider only the concepts derived from traditional healers’ training, leaving out their interactions and experiences with foreigners or people outside their culture, or those articulations between the local and the global.

However, there are other debates, such as the validity of ayahuasca without the ritualistic content. Currently, not only the approach of tea but also the popularization of DMT, its isolated active principle, makes the recreational use very common, devoid of any religious context. The anthropologist Lévi-Strauss considers that the effectiveness of shamanic healing lies precisely in the belief that the magic applied by the shaman will work. However, when we speak of the involvement of botany, we must also consider the effects of the active principle, together with chants and manipulations, in the final result. We cannot disregard the physical effects of DMT, for example, but the question is its medicinal character if removed from healing rituals.

In studies here in Brazil, researchers note the possibility of using ayahuasca as a treatment for depression. And, although they are very promising, for Luis Fernando Tófoli, professor at the Department of Medical Psychology and Psychiatry at the Faculty of Medical Sciences at Unicamp and one of the co-authors of the work, it is still necessary to find out the causes of the improvement presented by the patients involved. Among the possibilities are the holistic and emotional experience associated with psychedelics, the ritualistic and therapeutic aspect of the situation or even the physiological effect of the substance, such as the reduction of brain activity in areas associated with depression or the stimulation in the formation of synapses (connections between neurons).

One of its other modern uses is in the recovery of people who make problematic use of substances. There are many centers that carry out this type of treatment, both in Brazil, in Peru and in other countries in South America, and research shows that the substance can be more than a mere “replacement therapy”. 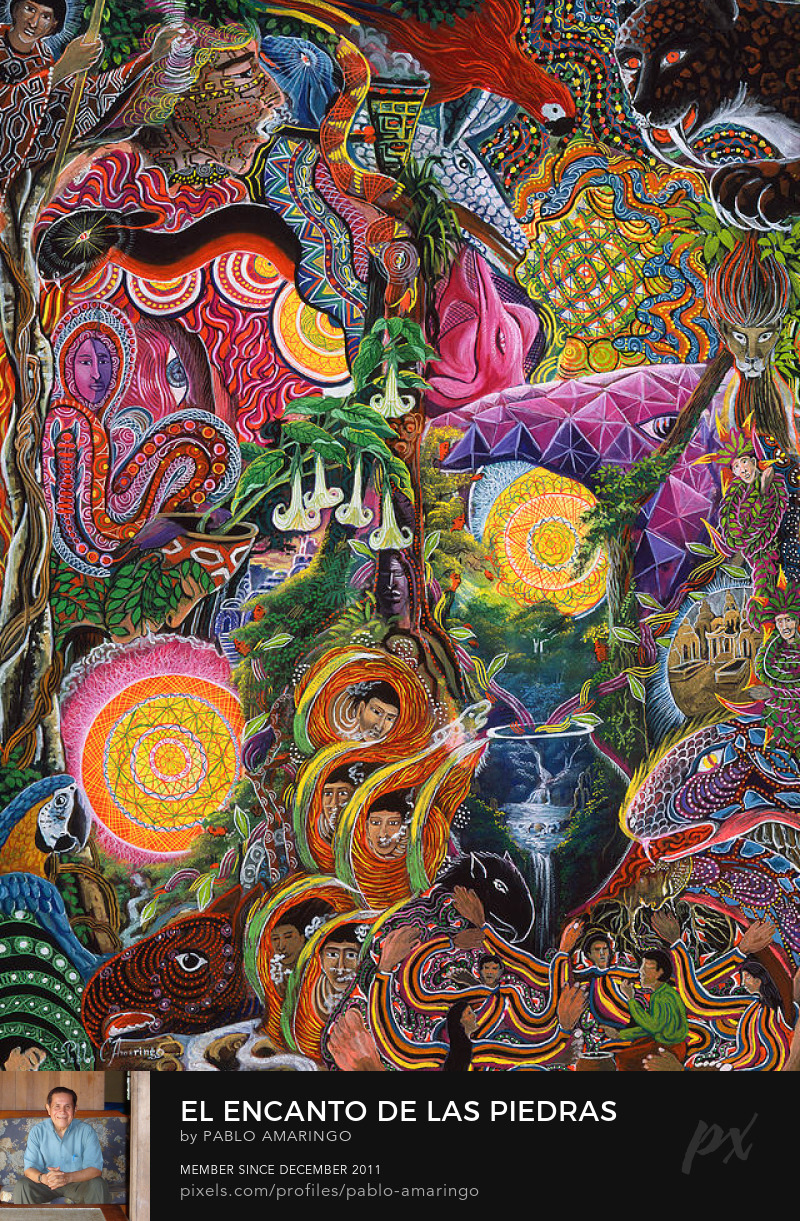 What is the legal status of ayahuasca?

Ayahuasca was once considered an illegal drug, and many lawsuits were needed to remove it from the prohibitionist context.

Today, its use here in Brazil is lawful, but it has restrictions. Our regulation also allows scientific research with the plant to be done without so much bureaucracy. Thanks to the union of Santo Daime and União do Vegetal, the consecration of ayahuasca is also allowed in some European and North American countries. In Peru, it has been considered a cultural heritage since 2008.

And what are its effects?

When consumed, ayahuasca takes about 30 to 60 minutes for the effects to start, and peaks in two hours. The total average duration is 4 to 6 hours. In cases of inhalation or injection, as is used in certain research and medicinal contexts, the effects can be felt in a matter of seconds and last for about 15 to 20 minutes.

Changes in the mind can be of various types. The American psychiatrist Rick Strassman observed, in years of studies and application of DMT, that more than half of the patients report the contact with beings of light and entities from other planes of existence. Many also report extra-corporeal experiences, as if consciousness is detached from matter. 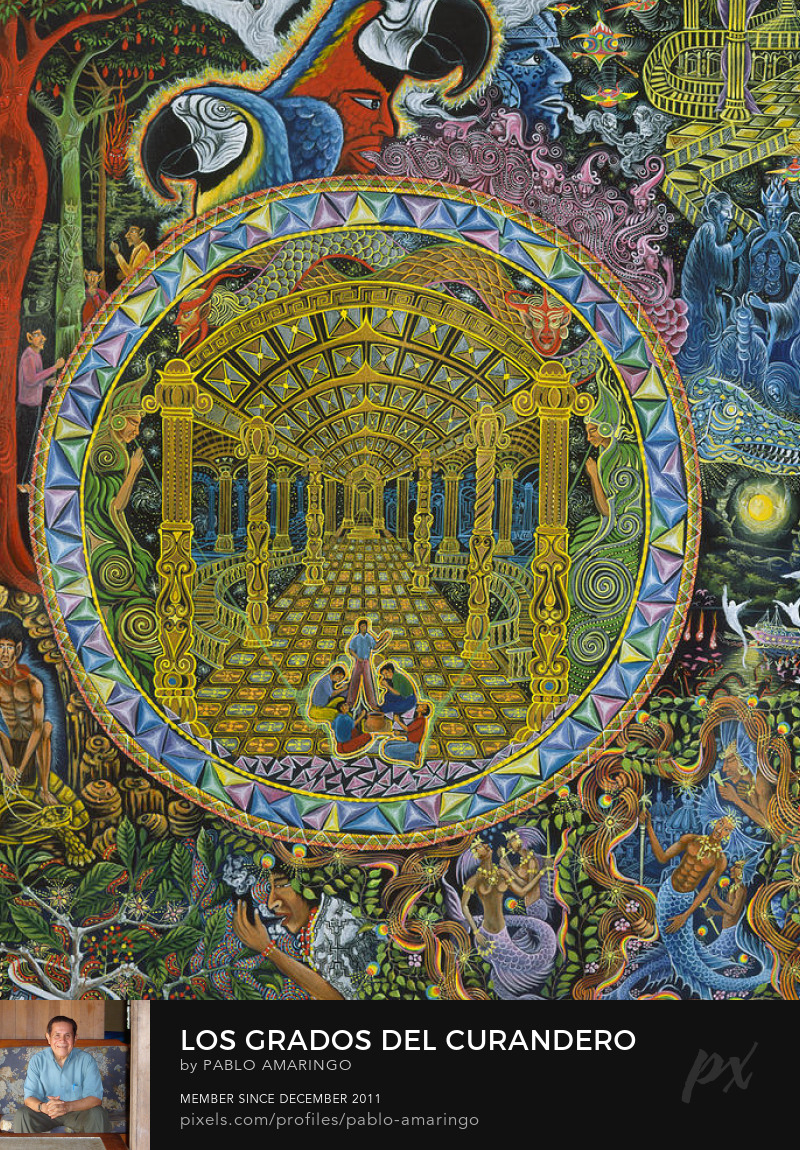 It can cause burning in the stomach, nausea and vomiting, as well as excessive sweating, all are considered as a “cleansing” of the body and the soul of those who drink the tea.

The use of cannabis together with ayahuasca is not only common, but a ritual and even daily practice for many followers of Santo Daime. Around the 70’s, the herb was inserted in the religious context of the group, being re-signified, sanctified and called Santa Maria.

Generally, cannabis is used during breaks or at the end of daimist ceremonies, often to decrease the strength of the daime and regain consciousness. In addition, it can be used as a way to calm down in ceremonies, especially during trips with more painful or difficult visions.

We, at Girls in Green, have not found research that points to the risks of this mixture. However, our tip is to always use them respecting your body and the contexts proposed for use, preferably remembering Harm Reduction!

Ayahuasca is one of the most interesting, extensive and detailed topics that we have already talked about here on the blog, and it is incredible to be able to know more about this ancestral knowledge, so rich and present in countless cultures. Did you already know this substance and its rituals? We hope we sparked your curiosity.