Table of contents:
I. What is MDMA
II. Its uses from science
III. Its uses in other contexts
IV. How do you interact with other drugs?
V. Harm Reduction Tips

Understand how MDMA and Ecstasy have been and are still being used and what science says about it! Substance categorized as empathogenic and that can have therapeutic effects if used in settings and risks in situations of vulnerability.

You may remember seeing it at parties, raves and festivals, in that famous little bag, when a colleague offered it, or you may just have heard of it. MDMA, like ecstasy, is a widely used drug in a party setting – but like cannabis, it has been used medicinally for some time.

The substance was separated in the laboratory and patented by the pharmaceutical industry, but after decades it has been banned by the Drug Enforcement Administration (DEA), the legal agent that regulates everything related to drugs in the United States. That’s because, at the time, there was a growing wave against conscience-altering substances – while, on the streets, their use only increased.

Today, there are many studies that prove its therapeutic power in different fields, mainly in relation to mental disorders and problems related to our brain. But how is it used? And what are the effects, risks, contexts and harm reduction strategies?

In our fourth text in the series “Cannabis and other drugs”, we will better understand this substance and its properties. Come with us!

Alert: our series is not intended to encourage the use of substances, but to provide information about each one of them, as well as to reduce possible damage from use.

MDMA (methylenedioxymethamphetamine) was accidentally isolated in 1912 by the German chemist Anton Köllisch, but only years later, in the 1950s, it was resynthesized and thoroughly researched by the American chemist Alex Shulgin. The vegetable ancestors of MDMA are volatile oils contained in nutmeg and seeds of calamus, saffron, dill, parsley and vanilla. In the 70s, substances like MDMA, such as DOM (dimethoxymethylnetetamine), DOB (dimethoxyanphetamine), TMA (trimethylamphetamine) and also LSD, were already used for recreational purposes.

MDMA is an empathogen, which acts by releasing the neurotransmitters serotonin, dopamine and norepinephrine – responsible for pleasure, well-being and focus. It touches on feelings, increases empathy and destroys a barrier that human beings place between reality and their desires. The substance deconstructs psychological obstacles, facilitating communication and therapy.

For a long time, the substance remained unexplored. It was then that Shulgin began to take an interest in hallucinogenic compounds and experiment with them. At the time, he worked at the pharmaceutical company Dow, where he created the world’s first biodegradable pesticide. This gave him more freedom when it came to directing his studies. In 1965, he resynthesized MDMA – but left the company, going to work for the FDA by consulting. In 1976, he took the drug for the first time, and introduced it to psychiatrist Leo Zeff, who started using it in his sessions because he believed it was:

“A psychoactive substance that has great potential as a tool for the development and research of consciousness, and can improve psychotherapy and personal growth and, occasionally, alleviate psychosomatic symptoms, when taken in an environment and support and disposition”.

Even so, the DEA, in 1985, decreed the ban of the substance, even its medicinal use. Soon it appeared on the illegal market and started to be sold as an aphrodisiac, and its consumption was predominantly in the night and party context. Research at Stanford University, California, indicates that 40% of students made experimental use of MDMA (Escohotado, 1997).

Currently, the substance is found in tablets of different shapes, cuts and sizes, in crystal, powder or capsules. They are usually ingested, macerated or aspirated (ResPire, 2016). The effects are usually:

In addition, some changes can be noticed in the user’s body. These physical effects are:

The effects are felt approximately 20 minutes after ingestion and can last from 4 to 6 hours.

Its uses from science

Much more than giving an extra boost to enjoy social events, MDMA has even been patented by the pharmaceutical industry and, as we said above, used therapeutically by psychiatrists and therapists. Although it is still banned today, it is still the target of several researches and studies, which see the medicinal value that the substance has when used in controlled environments.

MDMA as a facilitator of psychotherapy was first observed by Shulgin, who developed a method to synthesize the drug in 1965 and noted that it produced an “altered state of consciousness easily controlled with emotional and sensual nuances”. Because of this phenomenon, MDMA is often referred to as an “entactogen” (meaning “to touch from the inside”) or an “empathogenic” (“creating empathy”). It was already used successfully at the time to treat emotional disorders, such as Post Traumatic Stress Disorder (PTSD). More research is needed to fully understand how this effect is produced, although previous studies have found that the compound increases the concentrations of neurotransmitters such as serotonin, dopamine and norepinephrine in the brain.

Still this year, the FDA approved, in the United States, an expansion in controlled studies with MDMA. It’s in the last phase of testing, and, once performed, the agency will decide whether to approve the substance as a legally prescribed treatment for PTSD, necessary to be used in conjunction with psychotherapy in an outpatient setting with a residential stay. If positive, it will be a huge breakthrough for patients – including war veterans and even victims of sexual abuse.

In Brazil, the empathogenic substance, also known as Love Drug, is also being investigated as a possible ally in the treatment of PTSD related to experiences with epidemic violence. The researcher Eduardo E. Schenberg, responsible for the research, is a Ph.D., has a Bachelor’s Degree in Biomedicine and a Master’s Degree in Sciences in Psychopharmacology (Federal University of São Paulo) and Doctor in Neurosciences (University of São Paulo), having completed a post-doctorate. in the neuroscience of Ayahuasca and LSD, at the Federal University of São Paulo and Imperial College London, respectively. Since 2014 he is the Principal Investigator of the first psychedelic therapy research with a controlled psychedelic in the history of Brazil, in partnership with MAPS. Now, researchers are looking to fulfill the legal requirements for the first process of importing a controlled psychedelic for further investigation. The group presents a model of how to advance the development of MDMA as a legally available drug in Brazil, which it hopes will be successful with the phase 3 of MAPS testing through 2021.

There is also research that investigates the possibility of using MDMA in autistic patients to reduce their social anxiety. MAPS is sponsoring a pilot exploratory randomized study to assess the safety and feasibility of substance-assisted therapy, initially with 12 individuals on the spectrum – if the results are positive, more research will be done. As we have seen here, cannabis is also used for this!

Its uses in other contexts

In party and adult contexts, many users (and even non-users) have a common question regarding the substance: after all, are ecstasy and MDMA the same thing?

Yes and no! Confused? Wanna know more about it?

Ecstasy contains MDMA along with several other substances, such as caffeine, amphetamines and other chemicals. MDMA is the pure substance, usually found in crystal or powder. Oh, and it’s not because it’s that consistency that it’s necessarily MDMA. There are several possible adulterations, which prevent substances, due to prohibitionism, from reaching the consumer in a regulated and controlled manner.

Ecstasy is generally used in party and festival contexts. The big problem is that, also due to the lack of regulation and consequently of quality control, it is practically impossible to know what is ingested and what is its exact concentration.

That is why, even though it has therapeutic potential, care must be taken: chronic use – especially recreational use, without dosage control – can lead to impaired memory, attention and the development of depressive pathology (ResPire, 2016).

How do you interact with other drugs?

According to the Safe Drug Combination Guide, the combination of cannabis and MDMA is safe, and the substances act in synergy – that means one stimulates the effects of the other. The only problem with this interaction, which must be carefully observed by users, is that, if you want to stop your MDMA wave, using cannabis will cause just the opposite effect!

One of the main warnings is against its concomitant use with opioids, such as codeine, heroin and morphine. You also need to be cautious when mixing it with alcohol, caffeine, cocaine and GHB.

So, did you enjoy learning all this? It’s amazing how much of what is considered a drug today has already been used medicinally. This is where we see that the biggest “problem” is not the substances themselves, but the dangerous relationships that can be created with them. We have already talked about it here – and it is really something very interesting to bring to the dialogue!

Questions and comments are always open to anyone who wants to know more! See ya. 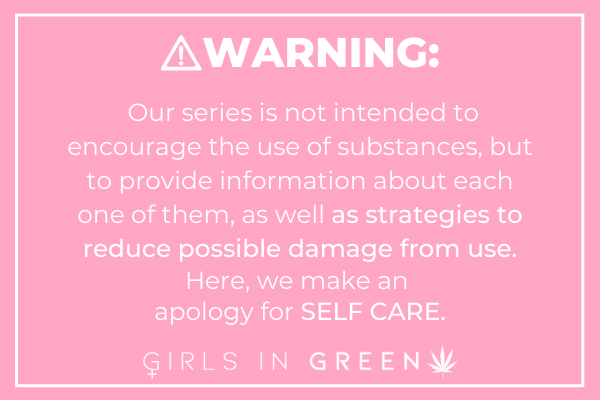